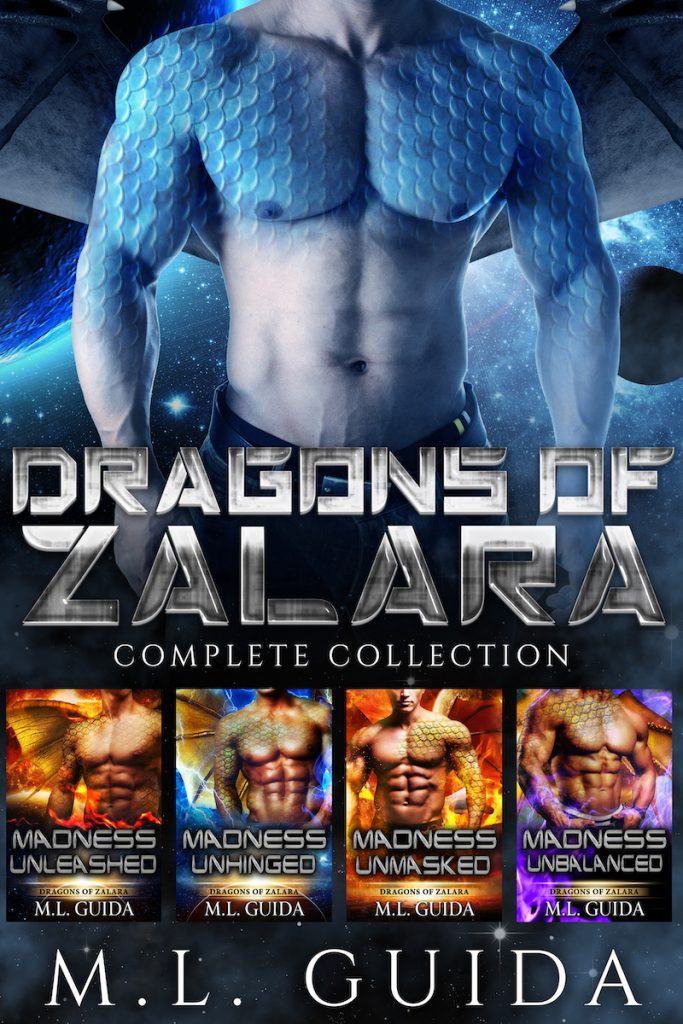 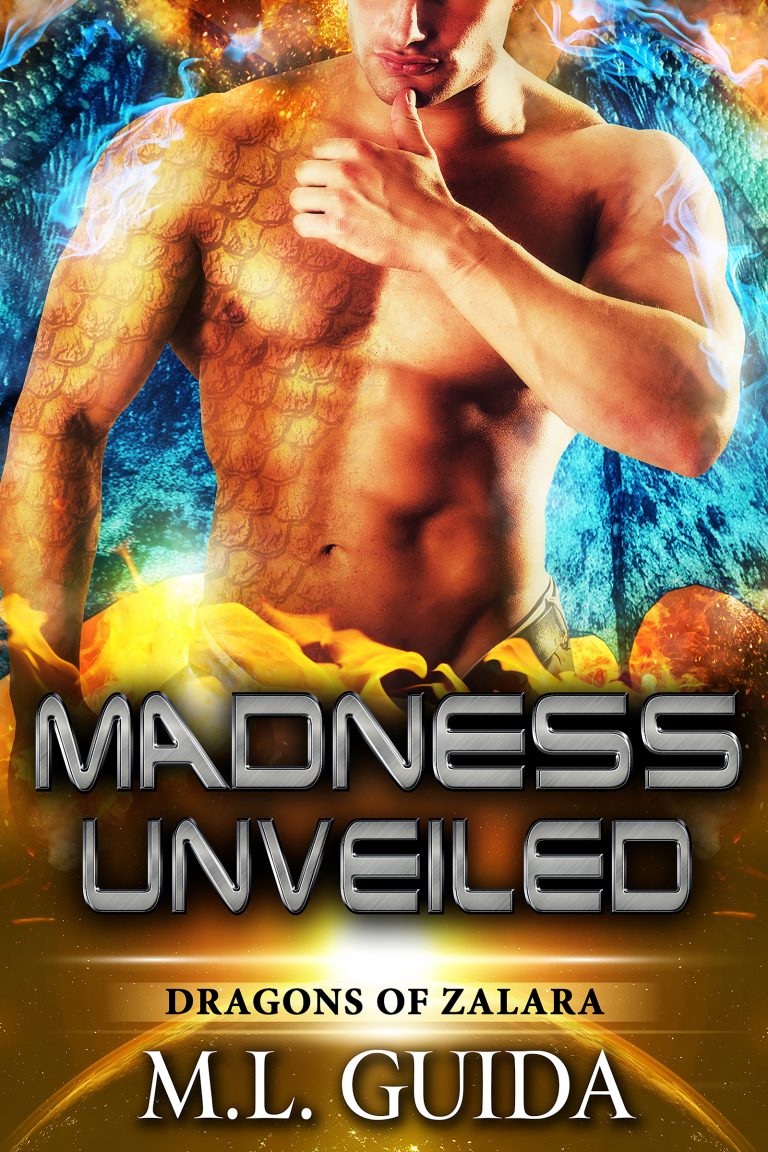 He’s an alien dragon who wants redemption from his haunted past. But every path he takes leads him to a gifted human sensitive. And his mate.
Her powers failed her once before, and she’s reluctant to try again.

His mission is to stop a mad plot to destroy the universe. He’ll do anything to stop his evil torturers from finding and using the potency stones, but he can’t do it alone.

She’s a drug and alcohol counselor in Scotland. Her powers failed to save her brother, and she vows never to use them again. Not even the persuasion of a handsome stranger can change her mind.

That was her first mistake. She wakes up hours later on a spaceship. He gives her a choice: use her powers and help him find some mysterious stones or remain his prisoner forever.

Want to find out what happens next in ML Guida’s Dragons of Zalara!! Get Madness Unveiled today!! 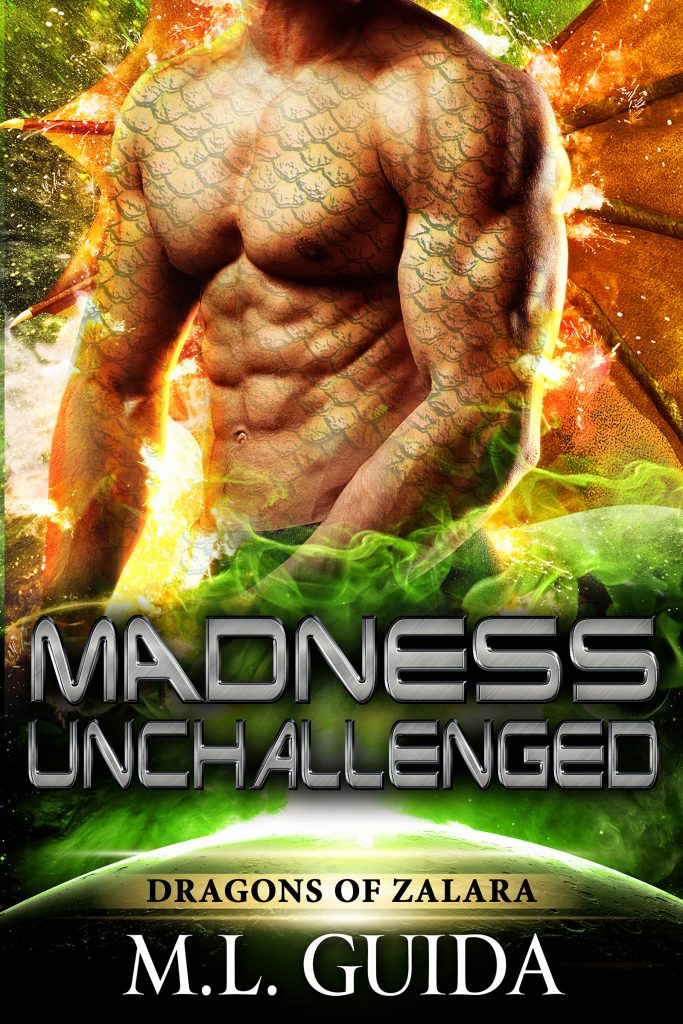 He’s a tortured alien dragon–determined to save his enslaved brothers. All his attempts have failed.
Until he meets her. A human psychic. And his mate.
She holds the key, but she thinks he’s the prime suspect.

He’s narrowly escaped from his prison, but his brothers are still trapped. He won’t abandon them. He’ll do anything to save them, including kidnapping a stubborn human woman.

She’s a Scottish detective. In an abandoned castle, her partner is murdered. She blames herself. She wants justice and won’t let anyone stand in her way–including a handsome suspect.

He claims she’s his mate and has psychic abilities––she attempts to arrest him. When she wakes up hours later on a spaceship,
he makes her an offer to use her abilities to save his brothers or remain his captive forever.

Have you been waiting for the next book in ML Guida’s Dragons of Zalara series? Get Madness Unchallenged today!

Curvy Chloe Pitt wants to get her book published and at the Romantic Love Convention she meets a famous agent, who wants to hear about her book. She soon finds out he wants more than her book. When she turns him down, he slips a Mickey in her drug, and she wakes up naked at the pool. Humiliated, she flees to Mexico to teach paddle boarding and hide from the world. Nothing could get worse until she meets Drake.

Drake, the Angry One, finally gets chosen to have a mate. The Fates tell him he’s got to be gentle with her, because of her trauma. But he doesn’t listen. After he kidnaps her, in a fit of rage, he battles a small Kamtrinian ship. The battle takes place in another solar system, where the Seps abhor violence.

The Seps put a stop to the violence. Their solution: only the strong will survive. Chloe and Drake have to defeat and kill the Kamtrinian couple or die. But they can use no weapons and Drake can’t change into a dragon. Can they trust each other and prove to the Seps they deserve to live? Or will Drake’s anger, destroy them both?

Ysam, a dragon shifter, must kidnap his mate and bring her back to Zalara if he ever wants to join the crew of the Orion. But he’s got a big secret.
Kathy Strong, a psychic and a defense attorney, swore off all aliens and is furious when she wakes up in a space craft. All she wants to do is return to Earth and have a normal life.

Caught in an asteroid storm with communications jammed, they are forced to land on a hostile planet. With flesh-eating aliens on the prowl, can Kathy and Ysam trust each other to survive?

Part of the 20 Shades of Shifters 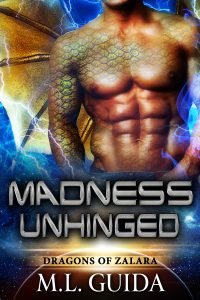 Jack the Ripper is back!

Two women are found brutally murdered in modern-day Denver–their M.O. identical to the victims in 1888 London. But Agnes has no clues to the murder. Women are terrified, and if Agnes doesn’t solve the case, the police commissioner will have her handing out parking tickets.

Her troubles increase when a mysterious man appears, claiming to be with the FBI. But no one called them. He insists that she needs his help–her life depends on it.

It’s up to Anonghos, the chief security officer of the Orion, to stop a deadly alien from killing the Zalarian’s designated mates. He’s cut off from his ship, and to make matters worse, he doesn’t know who the alien is and must wait for him to strike.

His only hope is to stay close to the curvy detective who just happens to be his mate, without her accusing him of being the murderer. The body is count about to sky rocket and only by working together can they stop an enemy bent on destroying both their worlds.

Damon is in love with the queen of the dragon warriors and the only way to get close to her is to be her personal guard. But the Fates are against him. Instead of wooing the queen, he’s forced to go to Earth to steal his destined human mate.

Three months ago, Hera Athans woke up in a park with no memory of who she is, where she lives, or what she does for a living. Now, she’s in survival mode. Two months behind on her rent she’s one step away from being homeless—again. She didn’t think things could get any worse. But she was wrong.

Kidnapped by an alien and held captive on board the spaceship Orion only Hera has the power to soothe his savage beast. She must mate with a dragon shifter to save both their worlds and unleash a love that will shake the stars…or lose both Earth and Zalara forever. 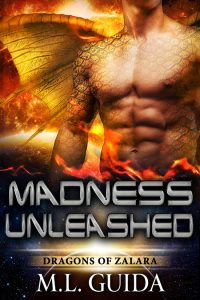 Coming soon! Madness Unleashed will soon be on audio! (The first 15 minutes!)