Do you love alien romance? This is the fifth book in the Dragons of Zalara! 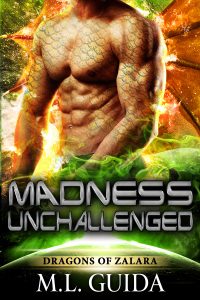 He’s a tortured alien dragon–determined to save his enslaved brothers. All his attempts have failed.
Until he meets her. A human psychic. And his mate.
She holds the key, but she thinks he’s the prime suspect.

He’s narrowly escaped from his prison, but his brothers are still trapped. He won’t abandon them. He’ll do anything to save them, including kidnapping a stubborn human woman.

She’s a Scottish detective. In an abandoned castle, her partner is murdered. She blames herself. She wants justice and won’t let anyone stand in her way–including a handsome suspect.

He claims she’s his mate and has psychic abilities––she attempts to arrest him. When she wakes up hours later on a spaceship,
he makes her an offer to use her abilities to save his brothers or remain his captive forever.

Have you been waiting for the next book in ML Guida’s Dragons of Zalara series? Preorder Madness Unchallenged today!