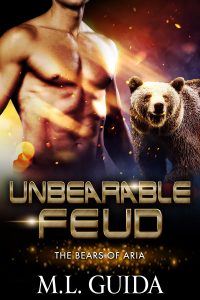 Unbearable Feud is now available for preorder! Come and meet the spunky psychic!

Scarlett Fox drew on everything she had to stop the tingles rolling over her–taking deep breaths, concentrating on the people talking, smelling the brewing coffee. But the hairs on the back of her neck and her arms stood straight up.

She wanted to be normal, but the vision was coming––coming to make her different.

Coldness frosted her heart, sending ice shooting through her veins. Scarlett dug her nails into the leather armrest.

Tremors rippled through Scarlett, making her teeth chatter. She wanted to answer the concerned waitress, but she couldn’t see her. Couldn’t see the cozy coffee house.

“She’s having a seizure.” A panic male voice said.

“My god, what’s wrong with her eyes? They’ve turned pure white.” Someone else said, but Scarlett wasn’t sure if the person was male or female.

The sleepiness was here, taking her away from the coffee house…

She was floating in darkness. Her arms and legs were stretched out wide. Her white hair floated around her.

Cold. She was so cold.

She sucked in her breath.

The blue and white Earth was below her and the dead moon was to the right.

She winced. Beyond the moon was the fiery sun that warmed her cold skin.

A shadow fell over the moon. It shrouded her.

Her eyes widened. A spaceship, something right out of Star Wars blocked out the sun. It was bigger than any rocket on Earth––big enough to hold a thousand men. Intrepid was painted on one side.

Suddenly, the stars whizzed. White, black, and blue colors flashed in front of her face. She fell faster and faster.

Her head snapped back hard. She couldn’t breathe and her heart pounded frantically. What was that? A spaceship? So, far her visions had always been based on reality. Spaceships weren’t real. Aliens didn’t exist. Had she just crossed over into the crazy zone?

“The paramedics are on their way.” She recognized that voice. It was the waitress who had been kind, bringing her coffee all morning.

Scarlett’s vision returned, and she stared into the worried eyes of the young waitress and the older manager that always reminded her of Santa Claus with his white brows and thick beard. Scarlett couldn’t stop trembling and wiped her sweaty palms on her jeans.

She gasped for breath and broke out in a hot sweat. She wanted to slither underneath the coffee table and hide. “I’m fine. I don’t…I don’t need the paramedics.”

The manager shook his head. “No, I think you do. You seemed to have had some kind of an attack.”

People had stopped sipping their coffee and typing on their laptops. All eyes were on her, reminding her of her family. She could read their minds and hear what they were thinking. She didn’t want to see their appalled faces. God, she didn’t want to so badly.

But it was there.

What’s wrong with her?

She grabbed her iPad and purse. “I’ve…I’ve got to go.”

Sirens screamed in the distance. Paramedics pulled into the parking lot, and she groaned.

A tall man ran over to the glass door and opened it. He pointed. “She’s over there.” His excited voice made her feel like the geek of the week.

The manager moved away.

“Hi.” One of the paramedics, a muscular dark-haired man, knelt in front of her. “I’m Ben Richards. Can you tell me what happened?”

At least she didn’t recognize him.

Heat swarmed over her cheeks. “Hi,” Scarlett muttered.  “I’m okay, Really.” She pushed her hair behind her ears.

The manager gestured toward her. “She had a seizure or something.”

“What happened?” Ben studied her.

The pale waitress looked at Scarlett. “She was out for about five minutes.” Her voice shook.

“Her eyes actually turned white. I mean…her pupils actually disappeared.” The tall man looked at Scarlett as if she were a creature from the planet Mars.

“I don’t need to go to the hospital.” Scarlett tapped her foot repeatedly on the floor. She clutched the strap of her purse tighter.

“Can you tell me your name?” Ben asked gently.

Ben blinked. “I guess you knew all the questions I was going to ask.”

The other paramedic smiled. “This isn’t your first rodeo, is it?”

She looked into his wise face. He was older than Ben by at least ten years. “No. It’s not. I’m fine. I need to go.” Go back home where it’s safe, where no one can see me.

“Miss, I really think you should go to the emergency room.” Ben used a stronger tone.

She lifted her head and met his direct gaze. “I know my rights. You can’t make me go with you.” Her voice was strong, but her insides were quaking.

Today, she was not going to be bound and put in a rubber room.

Ben sighed and glanced at his partner. “No, no we can’t.”

She scooted away from them. Her hair sticking to her hot cheeks. She stood, but her traitorous quaking legs betrayed her. She fell back on her ass.

“Miss,” the older paramedic said gently. “Your face is very pale and obviously your body’s unstable. Do you really think you can drive or walk?”

She wanted to argue, but he was right. Her SUV was parked right outside. But what if she got in it and had another vision?

She put her hand on her glistening forehead. “No, I don’t.” Misery clung to her words.

“We’ll be back with the stretcher,” Ben said.

She cast her gaze down and didn’t argue.

The waitress sat on the armrest next to her. “Is there anyone I can call for you?”

Scarlett shook her head. “No.” Once she was cleared, she’d take uber back to the coffee shop to get her SUV. No way in hell was she calling her family.

Ben and his partner returned with the stretcher. Scarlett followed the tiresome routine of allowing them to take her vitals and giving her oxygen.

She closed her eyes. Why was she seeing a starship? What did it mean?

I hope you enjoyed this! If you want to stay current, sign up for my newsletter, so you can get a glimpse into my current work in progress.