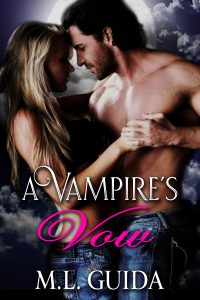 I’m so excited it’s out. I had fun writing this one. It’s also a second chance. Michael and Holly have been separated for over four years and things have changed. Like Michael’s a vampire and she’s scarred. They’re both strong characters. My heroine is special to me, because she’s a combination of two people I admire most–my two nieces. One is a bad-ass cowgirl and the other is a kick-ass in the National Guard. I’m so proud of both of them.

Michael Aims: I’m a vampire and I can shift into a wolf. My problem is I can’t control my wolf.

And I’m being hunted.

I sent my sister away so she’d be safe. I thought my high school sweetheart was deployed and in Afghanistan far from the vampire killers.

But I was wrong. She’s back.

And now they’re after her.

If I don’t learn how to control my wolf, I won’t be able to protect her. She’s my life.

I was a soldier and have second degree burns.

But he’s changed, too. He’s a vampire who can shift into a werewolf.

Vampire hunters want to kill him and now they’re after me.

Civilian life isn’t what I thought it would be–vampires, werewolves, killers.

One thing I know for sure. He doesn’t need to save me. I’m a soldier, trained to fight.

If killers are after us, bring it on. I’m ready.