I’m so excited! Shadows of A Vampire is now out! 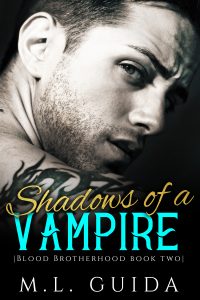 Can a dragon and a witch defeat the darkness threatening to destroy their love?

William O’Brien thought he’d be cursed as a vampire, but a crafty demon had other plans.

Now, he’s a dragon with powers he can’t control. He’s a threat to all those he loves.

His only hope is a beautiful witch who claims she can help him defeat the anger brewing inside him, but is she strong enough to defeat the fires of hell?

Mariah Fey wants to free her brother and she’s willing to risk her life to save him. If she doesn’t help a dragon regain his powers, her brother will be lost forever.

But what she didn’t count on is her growing attraction for the angry dragon.

Dark spells have been cast. One false move and their love could be torn apart.

If you like heart pounding action, fated mates, and happily ever afters, then you’ll love ML Guida’s Blood Brotherhood series.

Buy Shadows of The Vampire and fall in love with a reluctant dragon!

Another Peek into Unbearable Feud