I’m so excited for my newest vampire book! Vampires and Mermaids! If you love vampires and mermaids, you’ll love this book! 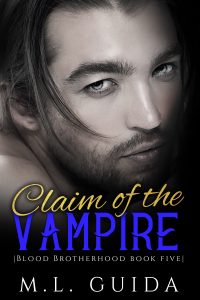 Isabella had sworn off all vampires, but she never counted on a dragon.
She’s fighting desperately to resist, because of a demon’s foul plans.
Love is the last thing on Leif Black’s mind until he heard her sweet song.
Now, she’s put him under her spell.
Isabella and Leif fight to deny their forbidden love, but the fates won’t be defied. When temptation becomes too strong, can they trust each other to defeat the looming darkness or will their differences tear them apart?
Claim of the Vampire is the fifth book in Award Winning Author ML Guida’s Blood Brotherhood series, a collection of dark paranormal romance novels.

Pick up Claim of the Vampire, and indulge in passion today!

“We need to hurry,” William said. “The transformation’s coming on fast.”
“Transformation?” Leif gasped.
The three men clamped manacles on Leif’s wrists; throbbing pain soared up his arms. He cried out, hating himself for showing weakness to his enemies. A pounding headache turned into stabbing agony. He tossed his head back and forth. Something pierced through his skull as if someone had shot arrows from inside. They dragged him out of the brig and up the stairs. He stumbled over a step, but strong arms kept him from falling. Fresh air drifted down the stairwell, but it did not nothing to ease the hot-as-hell sweat drenching him. Bright sunlight hit him in the face, and he winced.
“Blimey,” a pale pirate said. “He’s the devil himself. Look at ’em bloody horns.”
Men made a wide berth; frightened and wary faces looked at him as if he were Lucifer.
“Kill ’im, Cap’n,” a lanky man said, drawing out his sword, his hand shaking.
“One flying lizard’s enough,” another grumbled.
Leif shook his head, trying to figure out what the man was saying. He wasn’t sure he’d heard right. William was the only dragon in the Caribbean. He was possessed by a dragon spirit brought back from Coaybay. More pain pierced his temples. Dizziness blocked out rational thought.
He was vaguely aware of being shackled to a rock. Hot sand burned his feet, but ’twas nothing compared to the fever rising inside him. His lips tingled, growing longer. He rolled his tongue over needlepoint jagged teeth, more than he’d ever possessed as a vampire. His nose extended longer than an alligator’s snout. He tossed his head back, screaming.
Fingers and toes lengthened, turning into razor sharp claws. His cheeks extended, and he gasped for air, unable to suck in the tiniest snippet. Please, oh mighty God, make it stop. His rough skin changed into red and orange scales. Stabbing pain burst out of his back, and something flapped air, cooling his sweltering body. He glanced over his shoulder. Jaaysus, he had wings. There were sharp spines down his back, and he had a long tail. He wasn’t a vampire—he was a red dragon.

I hope you enjoyed this sneak peek! Look for Destiny of the Vampire that will released in August!