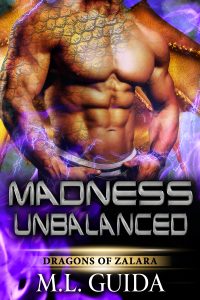 Another exciting Dragons of Zalara book: Madness Unbalanced. I had fun writing this one, especially since the heroine is a romance writer. I based this book on a man I saw trying to paddle board down in Cancun. He never gave up and I knew he would be a character in my next book!

Curvy Chloe Pitt wants to get her book published and at the Romantic Love Convention she meets a famous agent, who wants to hear about her book. She soon finds out he wants more than her book. When she turns him down, he slips a Mickey in her drug, and she wakes up naked at the pool. Humiliated, she flees to Mexico to teach paddle boarding and hide from the world. Nothing could get worse until she meets Drake.

Drake, the Angry One, finally gets chosen to have a mate. The Fates tell him he’s got to be gentle with her, because of her trauma. But he doesn’t listen. After he kidnaps her, in a fit of rage, he battles a small Kamtrinian ship. The battle takes place in another solar system, where the Seps abhor violence.

The Seps put a stop to the violence. Their solution: only the strong will survive. Chloe and Drake have to defeat and kill the Kamtrinian couple or die. But they can use no weapons and Drake can’t change into a dragon. Can they trust each other and prove to the Seps they deserve to live? Or will Drake’s anger, destroy them both?